Matchups of No. 1 vs. No. 2 in college football are not as rare these days thanks to the playoffs, and, prior to that, the BCS and Bowl Alliance which often would pit the top two ranked teams for the national title, beginning in the late ‘90s. What remains a bit rare, however, is for a regular-season game to pit No. 1 vs. No. 2. Interestingly, the last time we were treated to one of those was eight years ago, and it involved the same two teams going at it this Saturday in another No. 1 vs. No. 2 titanic, though you can take your pick of the top-rated team, as the AP narrowly had LSU atop last week, while the Coaches Poll opted for Alabama. In 2011 it was LSU that won the regular-season meeting at Bryant-Denny Stadium, 9-6, marking the most-recent Tigers win over the Crimson Tide. A bit more than two months later, there was a rematch, and another No. 1 vs. No. 2 clash, in the BCS title game, only this time Bama got its sweet revenge, 21-0.

Indeed, throughout TGS publishing history which began in 1957, there have been only 17 regular-season games (of 46 total into this Saturday) pitting No. 1 vs. No. 2, and only three of those in this millennium. Aside from the aforementioned LSU-Bama in 2011, Ohio State was involved in a pair of those in the 2006 regular season, winning both, at Texas and home vs. Michigan. (The 2006 Buckeyes would set a record of sorts by being involved in three such 1 vs. 2 clashes, with the third time definitely not the charm when top-ranked OSU was buried by Florida, 41-14, in the BCS title game.)

Following is a list of the No. 1 vs. No. 2 games in TGS publishing history (dating to 1957). Interestingly, we didn’t have a No. 1 vs. No. 2 matchup until the end of our sixth publishing season of 1962, when USC and Wisconsin tangled in the Rose Bowl. Note that couple of memorable showdowns, specifically the Halloween night classic in 1959 between LSU and Ole Miss, and the UCLA-USC epic in 1967, are not included as they were actually not 1 vs. 2 battles (Ole Miss ranked third prior to the 1959 game at LSU, and USC 4th in the polls the week before facing top-ranked UCLA in ‘67). Curiously, the records show that No. 1 has won 23 of these previous tilts; No. 2 has won 22, with one memorable draw (Notre Dame-Michigan State in 1966). That’s about as close as you can get!

As noted above, this week won’t be the first time that LSU and Alabama have met in a 1 vs. 2 clash. The Tigers and Crimson Tide have been waging memorable battles for a long time in what is now among the more colorful rivalries in the country. For many years, LSU-Bama was a featured game regionally before assuming more national prominence in the past decade. What we have always appreciated about this particular SEC bloodbath is that it started to heat up about the time TGS began to publish in 1957. Indeed, the “modern era” of Bama football began the following year, 1958, when Tide alum Paul “Bear” Bryant was hired away from Texas A&M. And, along with the Bear came an increasing spotlight for the series vs. LSU, though the schools wouldn’t begin playing on an annual basis until 1964.

Still, there was plenty of antagonizing going on between the Tigers and Crimson Tide in those days, mainly because of the coaches. LSU’s Paul Dietzel, hired a few years prior (three, to be exact, in 1955) to the Bear moving to Bama, had a bit of a head start on Bryant’s Crimson Tide tenure. When the Bear arrived at Tuscaloosa in 1958, Dietzel not only had a contender, but an eventual famous national championship side. Moreover, there was a prickly relationship between Dietzel and Bryant, under whom Dietzel had worked while an assistant at Kentucky. While Dietzel respected the Bear’s coaching acumen, he also knew Bryant’s reputation on the recruiting trail and was not afraid to tell anyone who would listen what he thought was transpiring in Tuscaloosa.

While, as mentioned, the series didn’t renew regularly until 1964, there were the occasional meetings, including opening night, 1958, which happened to mark Bryant’s debut at Alabama. The Alabama that Bryant inherited that season bore no resemblance even to the Tide sides inherited in later decades by the likes of Mike DuBose, Dennis Franchione, and Mike Shula. In fact, in the previous three years, the Tide had “rolled” to a woeful 4-24-2 record that included a 17-game losing streak, costing Bryant predecessor Ears Whitworth his job. But from the start, Bryant was determined to turn the Bama program completely around. Over the course of the offseason, Bryant put his troops through a brutal training camp, similar to an earlier version at Texas A&M that eventually gained notoriety in The Junction Boys, a best-seller book by Jim Dent.

Bryant was reorganizing the Bama program in quick order, but even with the foundations being put in place, it was still early days, and for the ‘58 season the Bear knew positive results might not reflect on the scoreboard. Bryant’s solution, in his own terminology, was “garbage football.” Bryant further explained in his autobiography. “A lot of quick-kicking and crazy plays that were really as conservative as can be. If you don’t have the talent to win with talent alone, you have to compensate.”
Meanwhile, Dietzel was hatching his own new plan in Baton Rouge. In 1958, the NCAA loosened substitution rules, allowing a player who came out of the game to return for the next quarter. This prompted much experimentation by coaches, including Bryant, who identified players eligible to go into the game by the poker chips they wore around their necks. Meanwhile, Dietzel‘s idea was to implement a three-platoon system of 11 players each with unique skill sets that could be swapped out en masse as situations dictated. The first squad (”White”) was filled with two-way standouts and got the bulk of the playing time. The second unit (“Gold” then changed to “Go”) was intended to be used on the offensive side. The third unit was made up of defensive specialists and dubbed “Chinese Bandits” from the newspaper comic strip of the day, Terry and the Pirates, which declared the self-said bandits to be “the most vicious people in the world.”

Dietzel’s ace in the hole was having perhaps the nation’s most-electrifying player on his roster. Billy Cannon was a 193-pound dynamo who was fast enough to run a 9.4 hundred yards and could shot put more than 54 feet. Dietzel decided to capitalize on Cannon’s skills by introducing a Wing-T offense, complete with unorthodox blocking schemes to help a relatively small line, and plays designed to create deception in the backfield. 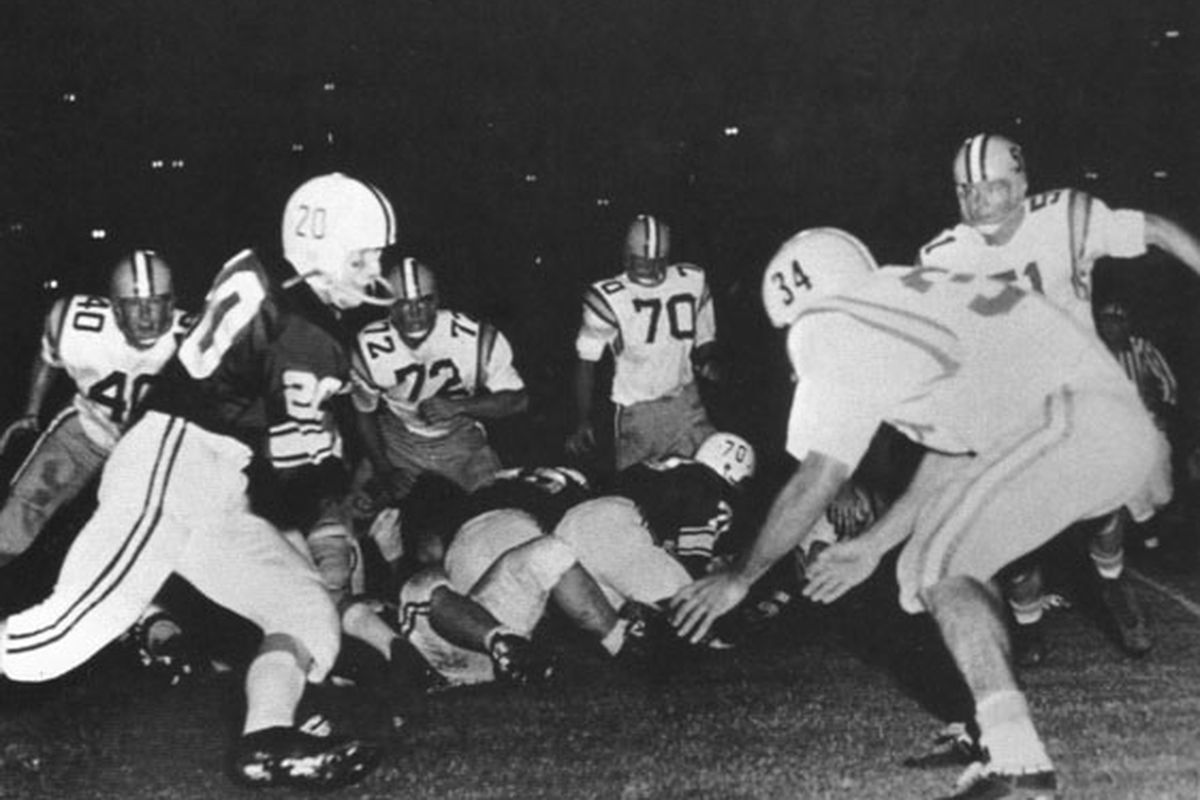 The 1958 opener was contested at Mobile’s Ladd Stadium, where Bama would play one game all but two years from 1948 thru 1968. More than 34,000 filled the stadium, though a frightening collapse of the temporary grandstands in the north end of the stadium at the end of the first quarter caused a halting of the game. More than 60 people were injured; fortunately, none fatally. When the game resumed, Bama, a 2-TD underdog, was performing nobly, keeping future ('59) Heisman winner Cannon in check and taking advantage of a fumble recovery to kick a field goal for a 3-0 halftime lead, though the “Chinese Bandits” would rise in a heroic goal-line stand to force the short 3-point conversion.

Dietzel would wait until the second half to unveil his Wing-T. Cannon began to rip off big yardage, and later described Bryant’s reaction in his own book. “You could see Bryant was trying to figure out what was going on,” said Cannon. “He started screaming, ‘What the hell are they doing out there? Somebody better tell me quick!’ You could see the assistants running for cover.”  A 9-yard TD pass from QB Warren Rabb to HB and future AFL star Johnny Robinson, and Cannon’s 12-yard TD run, gave the Tigers all the points they would need in a 13-3 triumph. LSU would go on a rampage thereafter, not losing the rest of the season, and sewing up the national title with a 7-0 win over Clemson in the Sugar Bowl. Bama? It would finish 5-4-1 in Bryant’s debut, but the seeds were being planted for something special down the road.

To see what we think of this week’s LSU-Bama game and the rest of the big weekend card, check our College Analysis.