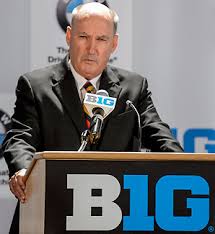 As is often the case in the football offseason, gridiron-oriented news cycles get dominated by superficial issues. Patriots fans might not agree, but the Tom Brady “Deflate-gate” scandal (which will be addressed more in depth on these pages in a few weeks) would probably qualify as such. As would the countless storylines regarding fantasy football projections that seem to be dominating the web these days. (We’ll have some unique observations later this season on the fantasy explosion as well.)

In the meantime, some truly significant headlines would briefly gain the attention of a handful of shrewd journalists and followers of the games who realize that big-time college sports do not operate in a vacuum, and that developments within that sphere can be traced to broader-ranging social policies that can impact everyday life. Discriminating students of the sports scene were also not surprised that the monolithic Big Ten would be at the epicenter of a couple of the more-meaningful of those storylines.

To refresh memories for those who might not have been paying attention a few months ago, Big Ten commissioner Jim Delany dropped a mini-bombshell earlier this year when announcing that his conference was considering a re-introduction of the freshman varsity ineligibility rule that had been standard operating procedure in major college sports from the 1950s thru 1972. The first reaction from various media precincts was that Delany and the Big Ten schools had temporarily lost their minds, that such a policy would be an effective death-knell in an era of big-time college sports (especially basketball) when high-profile recruits expect a chance at immediate stardom. Why would Delany and the Big Ten risk their powerful league putting itself at such a competitive disadvantage?

Except that probably wasn’t Delany’s purpose at all, though it took a handful of inquiring journalists to drill a bit deeper beneath the surface to figure out what the Big Ten might instead be positioning itself for in coming years.  Perhaps the best analysis of this possible Big Ten U-turn involving freshman athletes was presented by Colorado State alum and former MLB pitcher Mark Knudson, these days a journalist for Mile High Sports and co-host with the colorful Michael Klahr on the Sports Stampede radio show every Saturday morning on 1340 AM in Denver. While many in the sports media would scratch their heads at what Delany might be up to, Knudson instead articulated a reasoned response that better explained why on earth the Big Ten would be considering a concept that was being summarily dismissed as a non-starter by many observers.

“So why float the idea (of frosh ineligibility) in the first place?,” said Knudson. “Because this is actually a disguised step toward Delany’s real objective: He doesn’t want to pay college athletes, period.”

Knudson suggests that the freshman eligibility angle is not really at the center of Delany’s potential scenario, which should instead be viewed as a possible pre-emptive move that could end up protecting the golden goose that big-time college sports has hatched. With the courts having preliminarily ruled against the NCAA in the Ed O’Bannon vs. EA Sports case, plus Northwestern’s right to unionize challenge (which has since been rendered a verdict-–more on that in Part II of this entry in two weeks), Delany and the Big Ten, according to Knudson, might instead be formulating a way to stay a step ahead of future legal challenges that could threaten to redirect much of the expanding revenues that the major conferences are reaping from their ever-increasing and lucrative deals with major media entities.

“What Jim Delany really wants,” said Knudson, “is for the NBA and NFL to create their own full-fledged minor league systems and let colleges go back to being places for kids seeking an education. A minor league for the NBA and NFL would offer kids coming out of high school a choice to go to school for that education and to play sports or to go play sports to get paid. Some think Delany wants the NBA to drop their minimum age requirement, which could effectively end the “one-and-done” era in college hoops. What’s more likely is that with some more shoving from the NCAA, the NBA ultimately eliminates the age requirement for the NBA Developmental (aka minor) League only, so that high school kids can bypass college for an immediate paycheck if their long-term plans don’t include getting an education. How long after that would the NFL be more or less forced to follow suit and create their own football minor league?

“The pros and the NCAA already have this model in place for baseball. Coming out of high school, a young baseball player can opt to sign a professional contract and go into the minor leagues or commit to college for three years (two if he chooses to go to a junior college) or until he turns 21. If football and basketball did the same thing, then the NCAA could (rightfully) claim that the young men had been given the choice to get paid to play, but instead chose to forgo that in exchange for a college education. Offering that choice would alleviate the mandate for the NCAA to pay players and/or deal with the entire labor union mess that’s still hanging over their heads.

“To keep what they (the colleges) have, they have to offer an alternative for those who don’t want to do it their way.” 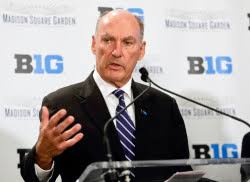 Knudson also reckons, quite correctly, we believe, that Delany does not believe such a policy would diminish the marketability of his Big Ten or college sports in general. “(Delany) firmly believes that fans would be fine with the on-field product as long as the ol’ alma mater’s name remained emblazoned across the front of the jersey,” added Knudson. “And he’s probably right about that.”

Many informed observers, us at TGS included, believe Knudson has hit the nail on the head regarding what Delany and the Big Ten might really have in mind for the future. Knudson also echoes a growing chorus of contempt for the NBA and NFL, which for too long have taken advantage of college football and basketball, acting as effective minor leagues for their vast enterprises.

Importantly, Knudson also believes that Delany and the Big Ten could be willing to risk pushing this strategy in coming years...as long as the rest of the major college conferences would follow suit. We agree with Knudson that there is no chance the Big Ten would ever go rogue and seek to implement such a radical policy shift on its own. But given how the Big Ten has shown the way to TV riches for the rest of the industry, Delany has perhaps more sway with the decision-makers than any other administrator.

Indeed, when Jim Delany talks these days, people are apt to listen.

(Part II of “Big Ten on the Fault Lines” will appear two weeks hence in TGS Issue No. 3, when we examine the recent ruling in the Northwestern unionization case. Next week we present our annual NFL season “over/under” wins projections. Note that Bruce Marshall from TGS appears with Mark Knudson and Michael Klahr on Sports Stampede every Saturday on 1340 AM in Denver between 9-10 AM MDT.)