Thanksgiving week is the closest link to the old late-November "rivalry weeks" that used to end every college football regular season with a bang. Until the conference shuffling that began in the 90s, many of the traditional rivalry games took place the weekend before Thanksgiving, with a handful held on the weekend immediately after Turkey Day. Often featured were annual showdowns such as Nebraska vs. Oklahoma from the old Big 8, and Texas vs. Texas A&M from the old Southwest Conference, storied rivalries now on hiatus since the proliferation of conference changes.

Fortunately, one Thanksgiving week rivalry endures in the same spot as always on the calendar. And, as the years have progressed, it can be argued that this matchup has retained its pizzazz and endured as a meaningful battle more so than many other long-time rivalries that have occasionally fizzled through the decades.

Ahh yes, it's time for Auburn-Alabama and the Iron Bowl!

You know it's a real rivalry when the two colleges despise each other so much that their game had to be played on neutral ground for almost a century. That's why from 1904 through '88, Bama and Auburn always played in Birmingham...when they played, that is. The Tide and the Tigers first clashed in 1893 (Auburn won 32-22), but the series was suspended after the 1907 game because of a disagreement over referees and expense money. Auburn's insistence on a "neutral" Northern ref and a $3.50 per diem (Alabama offered $3) led to a staggering 41-year (!) standoff and hiatus of the series that ended only when the respective school presidents, at the insistence of the Alabama State Legislature, agreed to bury the hatchet--literally--during a "Bury the Hatchet" ceremony at Birmingham's Woodrow Wilson Park. 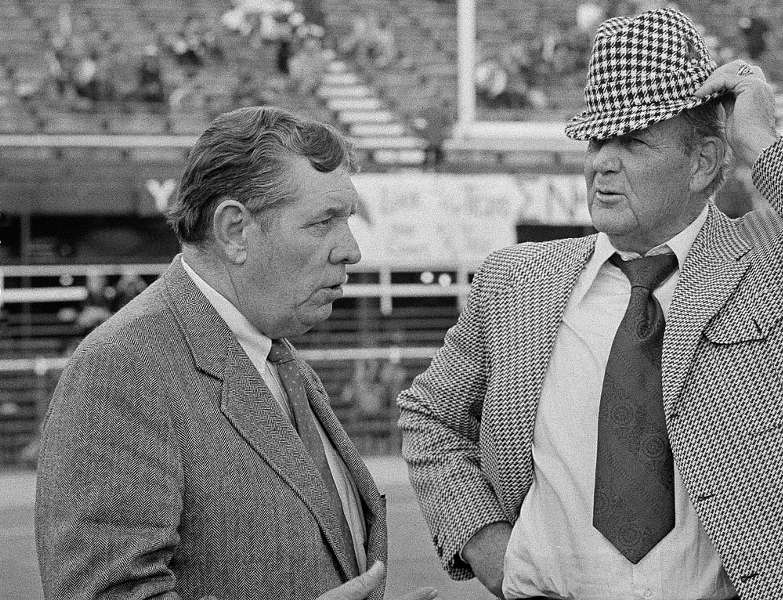 The Iron Bowl, named for the vast iron ore deposits in Alabama's hill country, was thus revived. When Bama won two of the first three games after the series resumed, Auburn fired coach Earl Brown before hiring alumnus Ralph "Shug" Jordan, whose teams would come to dominate the Iron Bowl until 1958 when the Tide hired Bear Bryant, who lost his first game to Shug in '58 before beating him nine of the next ten meetings (shutting out the Tigers on five occasions) until Jordan earned a bit of revenge with Pat Sullivan at QB in 1969 and 1970, the latter also a hard-to-forget thriller won by Auburn, 33-28.

Of course, mention of the Iron Bowl in recent years conjures up memories of the wild 2013 affair at Jordan-Hare Stadium won by Auburn, 34-28, on Chris Davis' 100-yard plus missed FG return on the final play. But many Iron Bowl aficionados, at least those on the Auburn side, still swear it was the 1972 game, featuring Shug Jordan's all-time improbable Tigers, that was most memorable of all.

As was the case in 2013, no one expected Auburn to contend in the 1972 SEC race. But as they would do in 2013, the Tigers were a season-long surprise and entered the Iron Bowl as an unlikely one-loss team, their only setback (as in 2013) at the hands of LSU. For Iron Bowl 2013, the Tigers were also double-digit underdogs of 10- 1/2 points, as they were in 1972 when getting 16 points from the oddsmakers against another unbeaten Crimson Tide entry.

Up to the Iron Bowl in '72, that Bama squad was being mentioned as one of the best of the Bryant era. The 10-0 Tide, with a squadron of backs featuring punishing FB Steve Bisceglia and future NFL RB Wilbur Jackson, plus option master QB Terry Davis, had been destroying foes with their version of the vaunted Wishbone. Bama entered the Iron Bowl ranked second in the country behind John McKay's Southern Cal, and had received some number one votes from pollsters in the week preceding the Auburn game.

Few gave Auburn, despite its 9-1 record, a chance in '72. And Bryant didn't seem to think much of the Tigers, either. The Bear, who had already accepted an invitation to play Texas in the Cotton Bowl, chastised his state rival the week before the game. "I'd rather beat the cow college (Auburn) than beat Texas ten times," said the Bear to the assembled masses at the Birmingham Quarterback Club.

For most of the game the Tigers did not disappoint naysayers, failing to generate any offense and seeming to lose touch the game into the second half, as Bama inexorably stretched its lead to 16-0. Yet along the way, in what seemed a harmless development, Crimson Tide PK Bill Davis' PAT, blocked by Auburn CB Roger Mitchell after a 2nd quarter Bama TD, would come back to haunt the Tide.

The Auburn offense would only gain 81 yards all afternoon, and when a rare foray into Bama territory stalled with just over nine minutes to play, Jordan called on PK Gardner Jett to try a 42-yard FG, which was converted. Some Auburn fans at Legion Field booed Jordan, believing all Shug had done was avert a shutout. But the fun was just about to begin.

Lightning would strike twice in the final 5:30 of action. With a seemingly-safe 16-3 lead and punting from his own territory at the 36-yard line, Bama's Greg Gantt, who, at the request of his coaches had moved a couple of yards closer to the line of scrimmage, ostensibly to reduce the angle of the outside punt-kick rushers, saw his boot blocked by former walk-on LB Bill Newton, the ball then bouncing perfectly into the hands of DB David Langner, who raced the rest of the way to a TD to cut the lead to 16-10.

After the kickoff, the Tide, behind its big OL anchored by All-American T John Hannah, seemed poised to bleed the rest of the clock by punching out a couple of first downs. But on a third-and-short, Bama QB Terry Davis was caught from behind by Auburn LB Mike Neel. The Tigers called their final timeout, and onto the field again trotted punter Gantt with 1:54 left to play.

In an amazing carbon copy of the previous punt, Newton once again swooped in on Gantt and blocked another kick, this one again bouncing into the hands of, you guessed it, David Langner, who in a repeat of events just moments before, ran in the blocked punt for a TD! Jett's PAT, after a harrowing snap to holder Dave Beck, gave Auburn a shock 17-16 lead with 1:34 to play. Then, to put a cherry on top of his afternoon, Langner intercepted a Davis pass on the next (and final) Bama possession to seal Auburn's 17-16 win.

For those who wish to compare the 1972 and 2013 Iron Bowls, and to contemplate which was more thrilling, we decided to consult the one Auburn alum we know who attended both games, Lyn Scarbrough, a longtime friend and editor at Lindy's Magazines. "For the 2013 game to compare to 1972," Scarbrough said, "Chris Davis would have had to run back TWO missed field goals in the last five minutes!"

As in 1972 and 2013, Alabama currently is chasing a national title and will be a prohibitive favorite in this week's Iron Bowl. And there are not comparisons being made with the current rather disappointing Auburn side as there were between its 1972 and 2013 predecessors. But it's the Iron Bowl, and it's Rivalry Week, so we suggest watching...you never know what you might miss.

(For our entire "Rivalry Week" forecast, check out this week's College Analysis. Also, for more info on the memorable 1972 Auburn team, soon to be the focus of an upcoming movie, and more in-depth review og the unforgettable '72 Iron Bowl, check out our website at www.goldsheet.com and look for this past summer's SEC Retrospective piece entitled "Punt Bama Punt and the 1972 Auburn Amazin's").