With the college football season now in full gear, and the Big 12 (with Baylor the only contender still unbeaten after three weeks) looking unlikely to have a serious national threat within its midst, the thought turns toward an outsider, perhaps from the “Group of Five” conferences (non-ACC, SEC, Big Ten, Big 12, or Pac-12) having a shot to place a team beyond the one guaranteed slot in a “New Year’s Six” bowl.

One school in particular from the supposed second tier is making the most noise early this season...and one that might indeed have a chance to crash the football Final Four.

Indeed, in our six decades of publishing TGS, we have often been entertained (and intrigued) by the University of Houston, which is back in the spotlight again, having cracked the top ten after its impressive win vs. Oklahoma and appearing intent on staying in the title mix. If the Cougars can navigate through a better-than-advertised AAC slate, a late November date vs. Louisville suddenly has the look of a potential Final Four-elimination game (especially after the Cards romped past Florida State last Saturday). We’ll discuss more about the future of UH as a possible addition to the Big 12 in upcoming issues. But, as we continue our season-long celebration of our 60th anniversary year at TGS, we thought we should shed some extra light on the Cougars, the subject of past summer Retrospective pieces on our website and whose colorful gridiron history is going to start receiving more coverage if the 2016 season proceeds on its current path.

Next month, Houston will be getting together again with Tulsa. But since we’re planning a comprehensive Alabama-Tennessee “Third Saturday in October” overview for that week’s issue, we thought now was the time to touch upon the history of UH and in particular the rivalry between the Cougs and Golden Hurricane, more specifically their wildly-unique clash at the Astrodome way back on November 23, 1968. A result that over the decades has invited some of the same curiosity that Wilt Chamberlain’s 100-point effort for the old Philadelphia Warriors against the New York Knicks in Hershey, PA back in March of 1962, has held for sports and basketball historians.

The final score, for almost a half-century an odd footnote in college football’s history, was a startling 100-6 in Houston’s favor. But there were so many oddities and sidebar stories to that record-smashing night (or disastrous debacle, if you’re an old-time Tulsa fan) that it simply demands a bit more explanation. Of which we at TGS, already into our second decade of publishing by that night in November 1968, are in a unique position to recall.

Houston had been making plenty of news in the mid-to-late ‘60s as an emerging gridiron power in its region. Part of the Cougars’ allure was the move into the futuristic Astrodome in 1965. At about the same time the UH basketball team, featuring Elvin Hayes, became a nationwide sensation. Rarely do we recall a school introducing itself so dramatically to the national stage as did the Cougs in the late ‘60s, forcing the staid Southwest Conference to eventually relent and admit UH to membership in the ‘70s.

The Cougars were significant in other ways, too, including an important role in helping to break the color line in the Southwest. As well as hosting the first football game to be played on artificial turf, when beating Washington State, 21-7, in the 1966 opener at the Astrodome. The previous fall in 1965, the Cougs would play on dying indoor grass when becoming the Dome’s first football tenant, preceding the AFL Oilers, whose owner, Bud Adams, couldn’t agree to a lease and didn’t take up Dome occupancy until 1968, playing at nearby Rice Stadium between 1965-67.

(The introduction of “Astro Turf” was also a lot more significant football milestone than many might realize. The Monsanto Company, creator of Astro Turf, was so excited about its invention that it took out a two-page ad to promote it in the game program of the first Super Bowl, played the following January between the Packers and Chiefs, with special emphasis on the landmark UH-Wazzu game.)

In addition, modern TD celebrations were also spawned by long-ago Cougar WR Elmo Wright, an All-American in 1970 and inventor of the first end zone dance, which Wright would further popularize in the NFL as a member of the Kansas City Chiefs. Where else but at UH, we ask, would TD celebration dances have originated?

Nothing, however, has quite piqued the curiosity and imagination of football historians like the startling scoreline of the 1968 Tulsa game, and some of the related developments that add even more intrigue and disbelief to that night of 48 years ago. 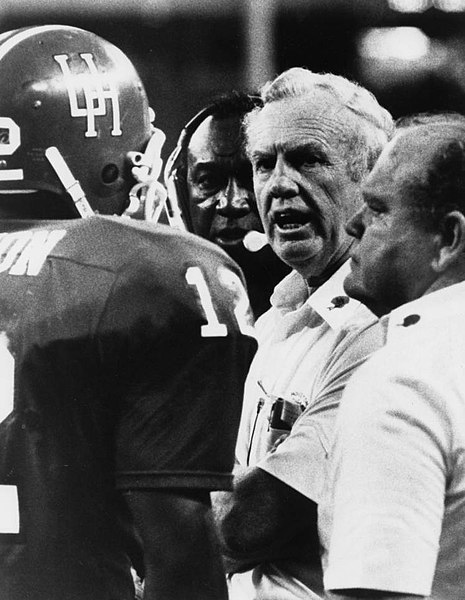 To put the hard-to-believe result in proper context, consider that there was significant bad blood between coaches Glenn Dobbs (Tulsa) and Bill “The Father of the Veer-T” Yeoman (Houston) after a series of results prior to ‘68. TU rallied to beat Houston 22-21 in 1963 and won 14-0 in the first nationally televised Astrodome football game in 1965. The Cougars avenged those losses, and offered a preview of things to come, with a 73-14 Astrodome drubbing in 1966. Yet the following year in ‘67, the Hurricane stunned 10th-ranked UH, 22-13, knocking it from the rankings.

Afterward, according to Tulsa World sportswriter Jerry Pogue, Yeoman declined Dobbs’ handshake offer and said, “Wait until we get you back in our place next year.” Though Yeoman has never acknowledged that exchange, something was obviously in the kettle for that record-setting game of 1968. UH scored a whopping 76 points in the second half that night, including 49 in the 4th quarter! Star RB Paul Gipson ran for a UH record 282 yards that would stand for 34 years, as the Coug Veer piled up 763 yards and in the process set an NCAA record for total offense in a season.

No college team had hit triple digits since 1949, when Connecticut beat the Newport (R.I.) Naval Training School, 125-0, and Wyoming blasted Northern Colorado, 103-0. And no college team has matched the Cougs’ 100 points since. Though UH hinted it might be up to the task when beating Idaho 77-3 the week prior to 100-6.

The game was perhaps summed up best by Wally Lewis, a student-writer who covered the game for UH's on-campus newspaper, The Cougar.

"Not one of the 34,098 paid partisans in the Astrodome realized when the massive Tulsa Golden Hurricane thundered onto the field to battle the UH Cougars, in what turned out to be a 100-6 mesmerization, that it would be analgous to the Charge of the Light Brigade. Elmo to the right of them,
Gipson to the left of them,
Volleyed and thundered.
Bailey passed so well
quickly the defenses fell,
Back from the jaws of death
Back from the mouth of hell
All the way to Tulsa..."

Although historically lopsided, the game did not appear en route to an epic blowout at halftime, when UH led “only” 24-0. And when Tulsa would score a TD early in the 3rd Q to cut the margin to 24-6, it hardly looked like a rout that was due to rewrite the record books. But for the rest of the second half, UH would run roughshod as the points kept piling higher and higher.

To this day, Yeoman, now 88, sticks with the story he gave reporters the night of the game, saying he was “embarrassed” that the Cougars could win by such a lopsided margin.

Instead, he points blame at the Golden Hurricane. “I don’t think the Tulsa kids played very hard,” Yeoman would say in an interview with the Tulsa World a few years ago. “I think they were a better collection of athletes than that. We had all our starters on the sideline. We were running the ball, and nobody was tackling anybody. They never should have let it happen.”

In Yeoman’s defense, he didn’t know of the degree of depletion on the Tulsa side. Several Hurricane regulars were hobbled from a 28-8 loss at Air Force the previous week, and many more fell prey to a flu virus that made it almost impossible to practice leading up to the game. Even HC Dobbs, nearing the end of his eighth and final year at the Hurricane helm, fell ill on Monday before the game and missed two days of practice.

“Everyone was sick,” remembers DB Ron Cambiano in another interview with the Tulsa World. “They had to quarantine us in our dorm. No one was able to practice.” Some at Tulsa were even wondering if the team should request to postpone, cancel, or even forfeit the game beforehand, so decimated were the troops. Cambiano was one of several starters who played the first half, but missed the second half due to dehydration. “At halftime, our locker room looked like a M.A.S.H. unit, with people lying everywhere, getting IVs,” Cambiano added.

Coach Dobbs was literally looking for volunteers in the second half; anybody who could walk and strap on a helmet played in the final 30 minutes, including walk-ons. Tulsa’s starting QB, Mike Stripling, would miss the second half, thrusting Johnny Dobbs, son of the head coach, into the fray. With a makeshift backfield surrounding Dobbs, including emergency blocking backs who had never played the position, Tulsa was no match for Houston’s pass rushers.

Yeoman insists that he substituted freely, although it wasn’t until the 4th Q that Yeoman began to show some mercy. Gipson, the Cougars’ star fullback, played into the final quarter before retiring with the aforementioned 282 rushing yards. By the 4th Q, starting QB Ken Bailey was on the sidelines, too. Many of the 34,098 fans in the Astrodome that November night, however, were still bloodthirsty and howling for 100 points as the score mounted in the 4th Q. The most-ravenous of Cougar fans were yelling for Yeoman to put Gipson and the first-stringers back in the game in the 4th Q as the 100-point mark began to loom on the horizon.

One of three 4th-Q TD passes (!) went to reserve WR Larry Gatlin (yes, the same Larry Gatlin from the Gatlin Brothers Band) and helped UH crack the 90-point barrier. But two of the final four touchdowns were scored on an interception return by future Houston Oilers DB Johnny Peacock and a 60-yard punt return by future San Francisco 49ers DB Mike Simpson, who weaved through a collection of zombie-like Tulsa tacklers to score the final TD with six seconds to play. Cougar PK Terry Leiweke had to boot the final PAT to reach 100 points, and said he was “never as nervous” as he was when awaiting the snap and hold for the 100th point of the night.

There is also a rumor, still to be confirmed, that none other than Phil McGraw (known better today as Dr. Phil), a reserve LB for Tulsa, played in the game, though the stat sheet from the game does not mention his involvement. Besides Gatlin and the Country Music connection, among other Cougars who we can confirm did play that night were LB Wade Phillips (yes, that Wade Phillips!) and DB Tom Paciorek, a longtime MLB player and broadcaster.

Sounds like a game that deserves a special Dr. Phil episode!

(One more sidebar note: The 1969 Tulsa press guide, perhaps inadvertently, or perhaps not, mistakenly noted the 100-6 score in Tulsa’s favor when listing the 1968 results, although we should point out that all of the scores from 1968 games were listed in reverse order!)