Though the past couple of years have been relatively quiet, we've still seen more upheaval in the college conference landscape over the past six years than we have the sixty years preceding. The next movement of those tectonic plates could be just around the corner, as a once covert process has become unabashedly overt as the Big 12 has not only announced it is considering expanding beyond its current 10-school membership, but is openly soliciting applicants.

At times over the past few months the process has more resembled the IOC evaluating bids from interested cities for the Summer and Winter Olympics, or FIFA for future World Cups. Only there has been no need for under-the-table dealings, as most of the candidate schools have been open about what they will be bringing to the conference table.

We mention Big 12 expansion because the next marker in this process is supposed to be coming soon, on October 17, when the league conducts its next meetings. The expansion topic is likely to be addressed, with even a possibility of invitations being extended. With the Big 12's top football contenders struggling on the field in September, and the league looking unlikely to place a team in the football Final Four, the October meetings could provide the Big 12's highlight for the autumn.

There are more angles and topics to be discussed about the conference that will be covered later this season in other installments that will likely stretch into TGS Basketball issues this winter. In the meantime, a look at the eleven remaining schools that reportedly made the "first cut" as expansion candidates.

Houston...UH is certainly the "it" candidate right now thanks to current football prowess, though just a few years ago the Cougars were floundering, and didn't even get bowl-eligible in 2012. UH intrigues mostly because of its potential impact in the lucrative Houston TV market, which has been overrun by the SEC (featuring nearby Texas A&M, and LSU not too far away) in recent years. TV execs, though, are reportedly a bit lukewarm to that angle, maintaining that they already have figured the Houston market into the Big 12 calculations, especially with its large concentration of Texas Longhorns backers. Texas, however, could figure prominently in any decision regarding the Cougs, as UT has a 300-acre parcel of land in Houston that it would like to develop into a new satellite campus. Which has met some resistance from UH. To placate the Cougs, might UT endorse a vote for UH to enter the league in exchange for a blessing on its new satellite campus in the area? Cincinnati...The Bearcats have been angling for something better than the American ever since the dissolution of the football Big East. In recent years, Cincy has openly campaigned for a spot in the ACC as well as in the Big 12. Adding the Bearcats would allow the Big 12 to extend its footprint into the Midwest. But how much clout Cincy has with TV execs remains a bit cloudy, because the Cincinnati area is already aligned with the Big Ten, as Ohio State is not too far to the east and Indiana not too far to the west, while the Queen City abuts the Ohio River and Kentucky, which is the northernmost SEC outpost. The Bearcats, however, would placate West Virginia, which is clamoring for at least one other semi-nearby school to be admitted to give it a regional rival and a travel partner in hoops. Cincy has also just completed some extensive refurbishing on its on-campus Nippert Stadium, though some sources maintain the Bearcats might have been better served by making a permanent move to the NFL Bengals' Paul Brown Stadium, similar to what Pitt did early in the last decade with the Steelers' Heinz Field.

BYU...Earlier in the summer, the Cougars might have been the favored team to gain admittance. BYU has a lot to offer, namely a national following and the clout to make its own deal with ESPN. Plenty of prestige and top-notch facilities in Provo, too. But the politically-correct element of society and the current educational system is suddenly throwing a lot of cold water on the Cougs' candidacy, as BYU's strict LDS code runs afoul of the LGBT movement as well as some Title IX considerations. Already, there has been a resolution from the Iowa State student government that opposed a Cougar invite. More than a few conference insiders consider the BYU candidacy to now be a "toxic" one. But this one is hard to read, because the Cougs bring a lot to the table both financially and football-wise. Yet in these days of the tail wagging the dog in college sport (more on that in a few weeks on these pages), it is also a plausible scenario to envision BYU effectively eliminating itself.

South Florida...The Bulls, along with UCF, could hold the key to a new region for the TV concerns, though network execs again wonder how much impact the Big 12 can make in Florida, which is already heavy SEC and ACC territory. The dynamics of the state and the growing population bases of Tampa/St. Pete and Orlando mean that logistically, USF probably has to be taken seriously. The Bulls do play in an NFL facility (the Bucs' Raymond James Stadium) and their SunDome is a functional hoops arena. Still, USF's appeal is based mostly upon its potential to open a new TV region. 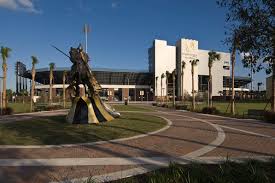 UCF...Ditto the USF appeal for UCF, which also has the potential to bring a dynamic and expanding metro area (Orlando) and region into the camp of the Big 12, which has to consider the Knights as well as USF if serious about exploring Sunshine State possibilities. UCF has opened a 50,000-seat on-campus stadium within the last decade and has an acceptable hoops facility. But the Knights, though with a couple of highlights on the field in recent years, do not add much prestige-wise to the league. Like USF, the potential appeal of more TV sets is the Knights' primary attraction.

UConn...If the Big 12 wants to make a footprint in another entirely new region, UConn would be more than happy to provide the entree into the Northeast. TV execs, however, are not quite sure how much clout the Huskies have outside the Constitution State, which has never been a college football hotbed, though UConn does indeed introduce the league to a new territory. The Huskies are also much like Cincinnati, having expended a lot of energy in hopes the ACC might come calling after the dissolution of Big East football. While the Huskies have quite a recent basketball tradition, their football pedigree is spotty at best. And much of the current Big 12 membership might not be thrilled with adding such a far-away locale into the league; indeed, the distance between Texas Tech and UConn is nearly 2000 miles. Safe to say the Huskies would probably not be the Red Raiders' first choice.

Tulane...If the Big 12 wants to push its boundaries eastward, but not all of the way to Florida and collar a nice new TV market in the process, Tulane could be a nice fall-back option. Though New Orleans proper has lost population since Hurricane Katrina, it is still the focal point of the region, and the Green Wave candidacy is mostly centered upon bringing the vibrant city and Gulf centerpiece into the mix. Tulane's TV clout, however, is considered a bit dubious, because New Orleans, even with its prominence in Louisiana, is not one of the nation's bigger TV markets, and the Green Wave has only occasionally been a factor on the gridiron in the past fifty years. Tulane has recently made investments in new football and basketball stadiums, but they would be the smallest venues (by a good margin) in the current Big 12 lineup.

Colorado State...It might surprise some that CSU, and not Boise State, has made the Big 12's first round of cuts out of the Mountain West. In Boise's case, the Broncos were not offering much besides their recent football prowess and occasional basketball trips to the Big Dance, as the Boise area is not a major TV market. Moreover, Boise's academic rating is decidedly low, which did not endear the Broncos to the Big 12 bigwigs, either. CSU, with its hefty 32,000 enrollment, rates more highly in that regard and has other possible bonuses, such as an entree into the Denver TV market (ranked 17th) and access to a major airport, with nearby DIA ranking fourth nationally in traffic. Once again, however, the TV execs are not exactly gushing over these favorables, as Ft. Collins sits at the edge of Denver metro, and the University of Colorado, closer to Denver, has more clout in the region. Besides, Denver TV means the Broncos and their fan base, much more than CU or CSU. Still, the Rams can at least semi-check the TV box (remember, Denver was also Big 12 territory for years when Colorado was a member), and they have made a major commitment to facilities in recent years, with a new, on-campus stadium ready to open next year, a football indoor training facility having opened within the past four years, and noisy Moby Arena having undergone upgrades. CSU's location is also not a problem for the rest of the current Big 12 lineup.

Air Force...There is plenty of cachet' attached to a service academy these days, and Air Force has made the first round of cuts because of its national fan base as well as USAF facilities in Texas, still the central area of the Big 12. The Colorado Springs locale is also not too inconvenient for the rest of the league. Some consider it rather ambitious of the Academy to court the Big 12 as it has. But the service academies want in on the college football loot, too, and the Force would like to include itself for a bigger piece of the pie than the current Mountain West provides.

SMU...Using its "Big D" location as its main selling point, SMU has made the first round of cuts in the expansion derby. The Mustangs bring plenty of history and prestige and lots of Dallas-area money into the equation, though the glory-day gridiron exploits of SMU are now generations ago. And while the school's facilities are either rather new (football Ford Stadium) or recently upgraded (venerable Moody Coliseum for hoops), they would both be by far the smallest venues in the current Big 12 lineup. TV execs are also said to be cool on the SMU candidacy, figuring the Dallas-Ft. Worth Metroplex is already Big 12 territory, and SMU would only minimally impact the current TV calculations.

Rice...The fact the Owls have even made the first cut suggests the Big 12 must be serious about the Houston market; why else even talk to Rice? (Indeed, this might indicate real strength for the UH bid, based on logistics). Rice is currently the second-smallest enrollment (behind only Tulsa) of current FBS members, and while the academics are rated highly and there is a much distinguished alumni, there is not a lot of the latter, as the alum base is small compared to other schools in Texas and candidates for expansion. Rice does not bring much to the table in the major sports, in which it has long struggled, though the Owls have fared well in other sports, even winning the College World Series back in 2003.