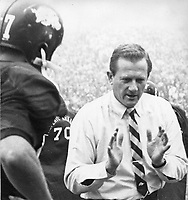 Beginning our seventh decade of publishing with this 2017 kickoff issue, we at TGS can’t help but recall some of our more memorable days, often which came in past opening weeks of the college season. We also fondly recall many of the legendary gridiron greats we have had the pleasure of following, though, as a byproduct of the passing of time, we are inevitably losing more and more of the all-timers who contributed to so many of those past remembrances. Especially some iconic coaches, three of whom have passed since we last visited in the Super Bowl LI issue.

Indeed, Frank Kush, Ara Parseghian, and Frank Broyles provided us with a lot of memories over the decades. In subsequent issues we will recall some of their myriad contributions; in the case of Notre Dame’s Parseghian, perhaps our all-time favorite who passed away earlier in August at the age of 94, we have planned a couple of tributes that will dovetail into events of the upcoming season.

When it’s time for opening-week memories, however, it’s Broyles, who passed away earlier this month at the age of 92, who often comes to mind for us at TGS. Last year we talked about one of the most exciting weeks in our 61 seasons of publishing, opening week 1970, the year in which the NCAA in January granted schools the opportunity to add an extra “11th game” to the schedule, beginning with that upcoming season. Among those taking advantage of the 11th game were traditional powers Southern Cal and Alabama, with coaches and friends John McKay and Bear Bryant agreeing to an historic home-and-home series that would commence with a game at Birmingham on September 12 before a return match in '71 at Los Angeles, events recalled in-depth last year in another TGS feature.

Yet the game that received the bulk of the attention that opening weekend 47 years ago was not SC-Bama, but rather a nationally-televised ABC clash and another “11th game” that Sept. 12 between Jim Plunkett’s Stanford and Broyles’ 4th-ranked Arkansas. Which became an instant classic, as a pulsating 34-28 win for the then-called Indians would be the talk of the nation the next week.

But neither that landmark game, nor the epic 1969 Texas-Arkansas showdown (detailed in a past TGS summer retrospective piece that can still be accessed on our website), nor the many big wins by Broyles Razorback teams we recall from the ’60s, sticks with us, and many Hog fans, quite like the 1974 opener at Little Rock vs. powerhouse USC. And therein lies the essence of why we at TGS love the unpredictability of opening weekends so much. 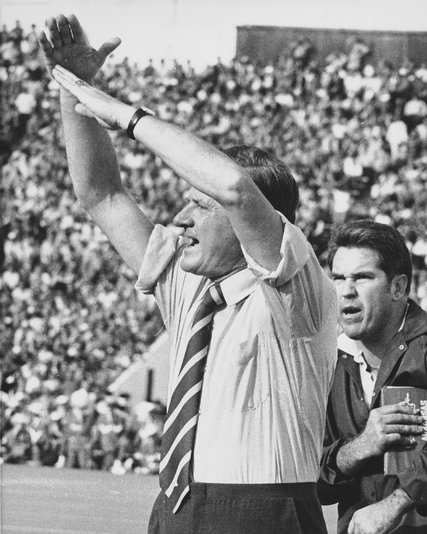 Though Broyles as a coach would prove not to be past his sell-by date in the mid ‘70s, it was generally accepted among observers of the old Southwest Conference a few years earlier that the Arkansas glory days under Broyles were likely over. Broyles, of course, has scaled some unimaginable heights after being hired away from Missouri prior to the 1958 season. Then only 33, Broyles had already been identified as an up-and-comer in the coaching ranks after serving as a trusted aide and o.c. for the legendary Bobby Dodd at Georgia Tech, Frank’s alma mater. Within two years of his Fayetteville hire, Broyles had the Razorbacks bowl-bound (a considerable feat in those days); by 1964, Broyles was coaching an undefeated team that would win a share of the national title. His ‘65 edition also made it through the regular season without a loss before becoming an upset victim to LSU and rugged RB Joe Labruzzo in the Cotton Bowl. Another Broyles masterpiece would come in 1968, when the Razorbacks would lose just once and then smothered Georgia, 16-2, in the Sugar Bowl. Though the team most fans remember was probably the ‘69 edition that lost a true “Game of the Century” No. 1 vs. No. 2 battle vs. Texas at the end of the regular season, 15-14, a result we at TGS have always thought was won by the wrong team.

(Part of the vast Broyles legacy was that he would also mentor countless numbers of future coaches who either played or worked for him, including Barry Switzer, Jimmy Johnson, Kenny Hatfield, Joe Gibbs, Johnny Majors, Hayden Fry, and Doug Dickey, not to mention a future NFL owner, Jerry Jones. There’s a reason why the national top assistant coach award is named after Broyles.)

By the mid ‘70s, Broyles was already transitioning into his new career as the AD at Arkansas, though would continue as the football coach thru 1976. The Razorbacks, however, had dropped from contender status in ‘72 and ‘73; at the conclusion of the former, Broyles made a switch to the en vogue Wishbone formation, even benching ballyhooed QB Joe Ferguson for the finale at Texas Tech in favor of Scott Bull, more comfy in the new alignment. Showing he still had the touch, Broyles managed a mild upset of the 8-2, Sun Bowl-bound Red Raiders, 24-14, in the finale.

What would be recalled most about 1972, however, was the opening-week fiasco vs. Southern Cal when the highly-ranked Razorbacks, who had received a handful of No. 1 votes in the preseason polls, were bounced at Little Rock, 31-10 (on the same night the USA would lose the controversial Gold Medal basketball game at the 1972 Munich Olympics vs. the USSR). Those Trojans would end up regarded as one of college football's all-time greatest sides and proceeded to finish 12-0, romping to the national title. The rematch, hosted by SC in the ‘73 opener at the L.A. Coliseum (above left), was another comfy Trojan win, 17-0, the first time Arkansas had been blanked in 73 games.

When the teams would conclude their three-game series in the ‘74 opener at Little Rock, there were not many who gave the Hogs much of a chance that Saturday night, September 14. John McKay had another powerhouse on his hands and was ranked in the top five in preseason polls. The oddsmakers didn’t think Arkansas had much of a chance, either, installing SC as a 16-point favorite. After all, in six games vs. Wishbone teams since losing a pair of clashes vs. Alabama and Oklahoma in 1971, McKay’s defense had allowed only 40 points.

Broyles, however, had spent the offseason plotting his revenge, and figured he would rely upon his defense to set a different sort of tone than the first two meetings. In particular, using soph LB Dennis “Dirt” Winston (a future NFL Steeler and Saint) to spy on Trojan A-A TB Anthony Davis. Slowing Davis, Broyles reckoned, would be the key to short-circuiting the SC offense and rev up the crowd. A few big plays could then turn the momentum in favor of the Porkers. 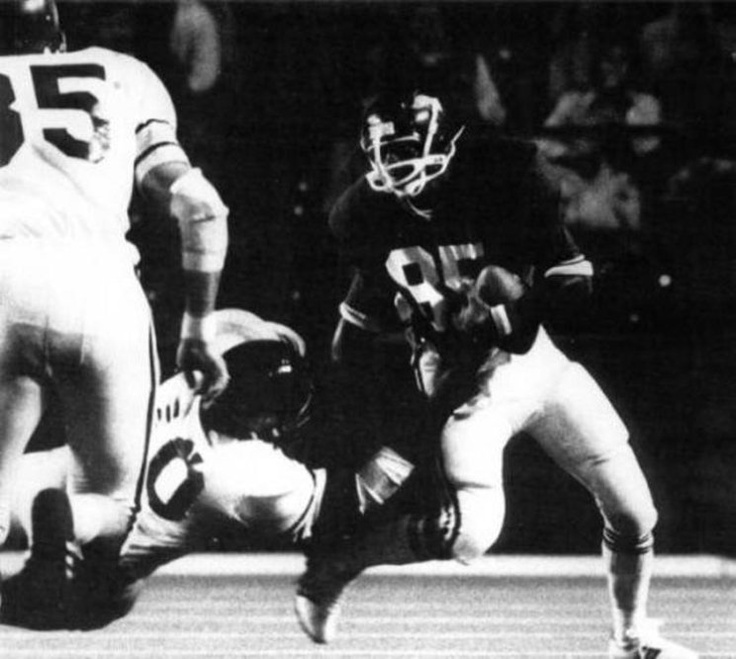 Broyles didn’t have to wait long for one of those game-changing moments. Just as the Trojans looked on their way to another routine win, knocking on the door at the Razorback 12-yard-line to stake themselves to an early lead, lightning would instead strike in the form of Hog DB Floyd Hogan, who stepped in front of a Pat Haden pass at the Razorback goal line and was off on a 66-yard return that put Arkansas in business on the Trojan 34, electrifying the War Memorial Stadium crowd! Then, on third down, QB Mark Miller would execute a perfect option pitch to HB Ike Forte (right; the last RB we recall wearing #85), who went winging around end for a 27-yard TD and a shock 7-0 lead. This early sequence would also light the fuse of the crowd and turn up the decibel-level in Little Rock, as Broyles had hoped!

Running near the SC bench, a few Hogs, including OT Gerald Skinner, began to jaw with the Trojans’ A-A LB Richard Wood. “I’ll never forget this the rest of my life,” Skinner would later say. “Wood turned to us and said, ‘Boys, it’s a four-quarter ball game.’” Which seemed prophetic, as none other than Davis would return the subsequent kickoff 106 yards for a score to knot the game at 7-7. Proper order, it seemed, had been restored.

Only it wasn’t. That would be the only highlight of the night for Davis, who, thanks to Winston, wasn’t finding any room to run. “When Dennis tackled (Davis),” said Razorback LB coach Harold Horton, “there was no more forward progress. He was stopped in his tracks.” After the Davis kick return, the Hogs did not flinch, as QB Miller, with help from HB Forte and FB Marsh White, kept their poise on offense and began to grind down the befuddled SC defense, which was en route to allowing 262 punishing rush yards by the Porkers. By halftime, Arkansas had re-taken the lead on a short FG by PK Steve Little before picking up where it left off after the break, converting another SC miscue into a Miller TD run.

Meanwhile, Trojan QB Haden, unable to rely on his usual bread-and-butter infantry complement, became harried as he tried to deal with the noise at War Memorial and the constant pressure from the Broyles defense. “I didn’t complete a pass to our team until the end of the third quarter,” said Haden, who would end with only 6 completions in 18 attempts for 59 yards to go along with four interceptions. “It couldn’t have gone worse for me personally.”

SC could simply not gain any traction, and midway in the 4th Q, Haden’s frustration would be complete when nailed for a safety and the final points in the Porkers’ shocking 22-7 win. “I thought it was possible to beat Southern Cal,” said Broyles afterward, “but I never thought we could look good doing it.”

As for RB Davis, he would later say that “even his shadow was hurting” after the beating he absorbed from Winston, who enjoyed a coming-out party and was named the national Defensive Player of the Week after his 19-tackle showcase. Meanwhile, Davis’ Heisman candidacy never quite recovered, as Ohio State’s Archie Griffin would instead become the clear early frontrunner and never relinquished that lead, with Davis ending a distant second in the eventual voting.

Some of Davis’ teammates would acknowledge the enthusiasm of the crowd in Little Rock after the game and gave the Hog fans their own applause when leaving the field. Trojan HC McKay, however, was not in such a conciliatory mood. “We threw poorly, caught poorly, tackled poorly, blocked poorly and coached poorly,” McKay grumbled afterward. “Otherwise, it was a perfect day.” Though the result might have been the best thing to happen to that Trojan team. Shed of cockiness, SC didn’t lose the rest of ‘74, its only other blemish a 15-15 draw vs. Steve Bartkowski and Cal in early November. Thanks to results elsewhere on New Year’s Day, and Oklahoma’s probation, SC would eventually claim a share of the national title after a pulsating 18-17 Rose Bowl win over Ohio State.

While improved, Arkansas never hit the same crescendo in ‘74 and ended up a modest 6-4-1. But the crafty Broyles had re-alerted the masses that he still might be capable of one more featured act in his storied coaching career the following ‘75 campaign, a tale we will hopefully revisit at some point later this autumn.

In the meantime, as we prepare for the beginning of another new season, memories of Broyles and Arkansas-SC in ‘74 continue to serve as a useful opening-week reminder...beware of the unexpected!