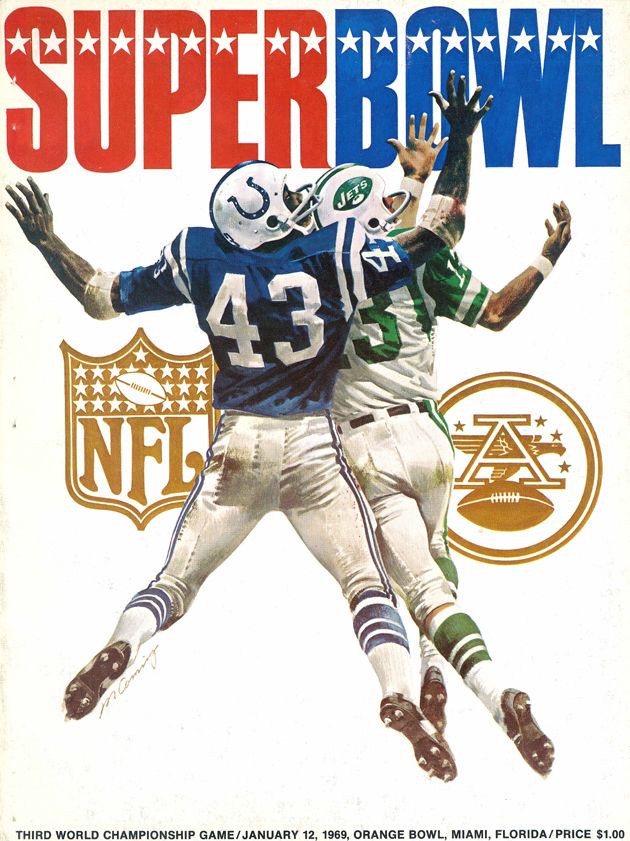 A few weeks ago we passed the 49-year anniversary of the game that really put the Super Bowl on the map...but nonetheless remains a bit of a mystery. We reprise our recount of the events of January 12, 1969, and Jets-Colts in Super Bowl III...

Frankly, there’s one Super Bowl in particular that we still can’t get out of our minds. Forty-nine years later, Jets 16-Colts 7 seems as hard to believe today as it was way back on January 12, 1969. And we’re not the only ones who still wonder what happened that afternoon at the Orange Bowl. Not to suggest that something was going on under the table that day in Miami, but the way that game unfolded has always invited some curious speculation, which makes it a bit harder to accept that it simply was the Jets’ day. Although we have never fully bought into some of the wilder conjecture about the game, as time has progressed we have occasionally wondered if there might be a bigger story attached to the conspiracy theories we continue to hear, even if we still consider it highly unlikely.

We do know that not everybody who participated in that game can accept what transpired in the Orange Bowl that day. It is said that star Colts RB Tom Matte is still upset, if not downright furious, about the outcome. And before he passed away in 2011, Baltimore DE Bubba Smith went even further, suggesting in the excellent AFL retrospective book, Going Long, written by Jeff Miller, that various forces at work might have conspired to affect the result. In the book, Bubba claims he had info as soon as the game was completed that something fishy had gone on, and he went about his own fact-finding mission. Among other theories, Big Bubba believes the NFL had a vested interest in a Jets’ victory, and that the upcoming AFL-NFL merger might have been in jeopardy had the Colts steamrolled the Jets, an outcome that would have given the established NFL three one-sided wins in as many Super Bowls against the upstarts from the AFL.

That’s a bit far-fetched (Big Bubba’s suspicions ran the gamut, including that a “big bet” had been placed on the game from someone in Baltimore, perhaps involved with the team), but we also know of some people who attended the game that day still can’t quite believe what transpired, especially the series of unlikely miscues that doomed Baltimore that cloudy afternoon in south Florida.

To be fair, the vast majority of players who participated in the game are on record as having accepted the result, and have moved on. Plenty of football insiders believe that Namath and the Jets were capable of springing the upset; indeed, RB Matt Snell ran for a punishing 121 yards, a SB-record that stood for several years. Big Bubba, by the way, was mostly neutralized by Jets OT Dave Herman that day. And we always had a hard time believing that Colts owner Carroll Rosenbloom would have been engaged in any shenanigans involved with betting against his own team.

Though no saint, and the subject of countless rumors about his penchant for gambling, Rosenbloom was also a man with an immense ego, and viewed his Colts and later Rams teams as extensions of himself. Their successes were his successes; their failures were his failures. It has been rumored (and unconfirmed) for more than a half-century that Rosenbloom bet as much as $1 million on his Colts in the famous 1958 NFL title game vs. the Giants, and that his wager influenced Baltimore’s play-calling in overtime, when the Colts plowed in for a winning TD (scored on a short run by Alan Ameche) rather than kicking a short field goal that would also have won the game, but not covered the spread. But the fact is that there were several compelling arguments for the Colts to go for the overtime TD, and that a TD indeed might have been a less-risky course of action than a field goal, as TGS founder Mort Olshan reminded readers in his classic 1975 book, Winning Theories of Sports Handicapping. No hard evidence ever surfaced that Rosenbloom influenced the play-calling or final score in that Giants-Colts classic, nor that he was involved in any chicanery regarding SB III.

Further, Rosenbloom was also an immensely popular owner with his Colts, and, later, his Rams players. It’s hard to believe Rosenbloom would have had anything to do with one of his teams not putting forth its best effort, especially in the biggest game of the year. But could someone else have been involved? 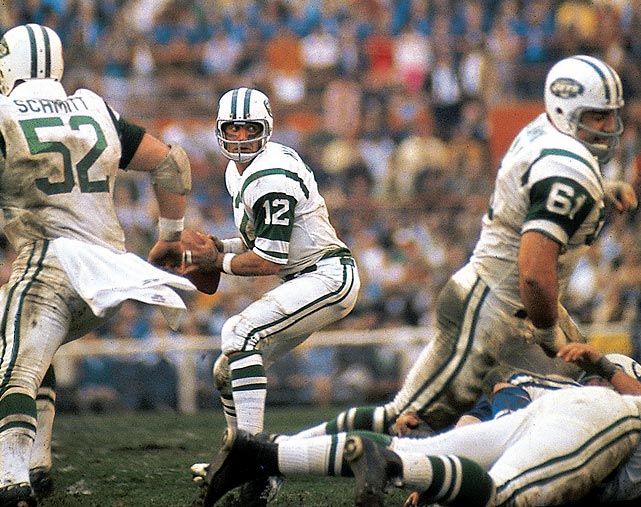 Perhaps, but unlikely. Let’s not forget some of the “rules” of a sports fix that never quite added up in Super Bowl III. As outlined by our Mort in his aforementioned book, the tipoff of any “fix” or “point shave” would manifest itself in the movement of odds and the appearance of “unnatural” money (customers wagering far in excess of their normal bets). The cooperation of a coach and/or a few key players would be necessary. And even then there would be no guarantee the culprits could pull it off. Further, there would need to be a sizable payoff. The chief deterrent to such a setup is that virtually the only outlet one can place a substantial bet with is a bookie, and once the first plunge is made, the odds would move, and more bets would follow. To prevent suspicion, the unnatural money would have to be spread all over the nation’s betting marts. And in 1969, though well before the advent of the Internet and offshore wagering outlets, there were still telephones, and word would have spread in the then-tighter sphere of the nation’s bookmakers quicker than news of a nuclear attack.

The sudden shifting of the odds and the appearance of unnatural money are the principal clues in any fixing operation. Although we know such things can occasionally occur in sports, Super Bowl III doesn’t appear to fit the profile. We say doesn’t appear because reports of the line dropping as low as 14½ before the kickoff were not consistent with the records kept by Olshan, whose accuracy on such matters was regarded as the definitive word in the industry. According to Mort’s detailed records and several conversations we had with him before his passing in 2003, there was indeed an orderly movement of the line for Jets-Colts, with Baltimore opening a 17-point favorite and hovering between 17 and 19 right up to the kickoff, despite Joe Namath’s braggadocio. And Mort, who knew a thing or two about the subject after doing some exhaustive editorial work on Long Island U’s infamous basketball point shaving scandal in the 1949-51 time period, never bought into the conspiracy theories regarding SB III. His meticulous notes and sharp memory suggested that the betting was, in fact, fairly well split, with no big moves on either side. Not the sort of dynamics that suggest any dump was in the works. And given the pointspread involved in Super Bowl III, the Colts wouldn’t have had to lose the game outright for Jets backers to cash their wagers.

Nonetheless, there remain some curious, if not downright odd, elements regarding how SB III unfolded. The Colts, who entered the game being mentioned as one of the NFL’s all-time great teams (indeed, they were more dominant up to that point than either of Vince Lombardi’s Packer Super Bowl winners that preceded them), were uncharacteristically sloppy that afternoon, committing five turnovers. QB Earl Morrall, who enjoyed an MVP season when relieving the injured Johnny Unitas, was awful at the Orange Bowl and was yanked in the second half by HC Don Shula in favor of the rusty Unitas, who had been injured much of the season and been used sparingly. And in later years, we found it a bit interesting that Jets HC Weeb Ewbank happened to know that Baltimore CB Lenny Lyles, who was turned inside-out by Jets WR George Sauer Jr. that afternoon, was suffering from strep throat. If Ewbank knew of this beforehand, where did he get such information? Did someone connected with the Colts (whom Ewbank used to coach) let Weeb know Lyles was ill? (There were some other possible connections and links of information between the teams, too.) And to his dying day, Big Bubba remained perplexed why there wasn’t a greater sense of anger among the Colts in the aftermath of the game, although Bubba seems to be the only Baltimore player on record as believing something was awry in Miami.

Despite all of the dots involved in SB III conspiracy theories, few of them actually connect, including the fact that Namath was linked to unsavory types through ownership of his infamous Bachelors III restaurant in New York that caused Broadway Joe, at the height of his popularity, to temporarily “retire” from the game that offseason. At best, it is all circumstantial evidence, mostly meaningless unless someone other than Bubba Smith steps forward with solid evidence to the contrary. (Though the Bachelors III angle is one that might demand some more attention one of these days while some of those characters are still around.)

Nonetheless, is it possible that SB III could have been a “point shave” operation gone awry, with the intention that the Colts were only meant to lose vs. the spread, and not lose the game outright? Theoretically, perhaps. But those few who continue to say so merely because it was possible are in fact being patently illogical.

After all, we suppose it’s also possible we could own a piece of the Kentucky Derby winner in 2020. It’s just not very likely.