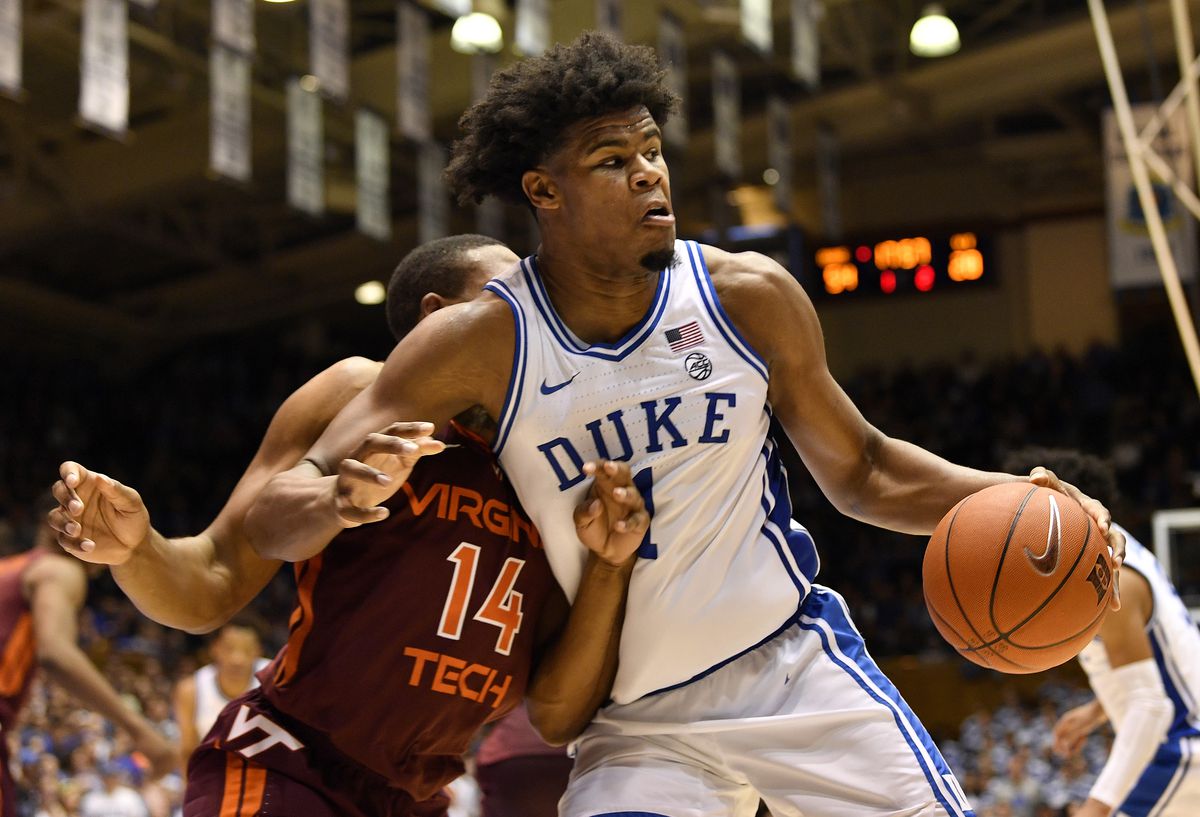 NEWCOMER OF THE YEAR: Vernon Carey, Duke...Not quite by acclimation as was Blue Devil predecessor Zion Williamson last season, Carey nonetheless appears a worthy honoree, even if this year’s newcomer crop seemed to lack the sizzle of a year ago. Carey, however, helped create the dynamics for one of the nation’s most-explosive attacks that would often look to the blocks and Carey for its first offensive option. Carey made an impact almost immediately, cracking the 30-point barrier by his fifth game (scoring 31 in an 87-52 romp past Cal on November 21 at MSG) en route to 15 double-doubles, and was a consistent force all season, saving one of his best efforts for his last game, scoring 25 and snaring 10 rebounds in an 89-76 win over hated North Carolina at Cameron indoor Stadium in the annual season-ending Tobacco Road war. We didn’t know at the time that it would be Duke’s last game of the season, and we’ll never know if Carey would have been at the middle of a deep Duke run in March. But for what we had to work with in the 2019-20 campaign, Carey seems the best option for this honor.

A couple of other notes about this latest TGS All-Newcomer team. While a few wonder if the month that North Carolina G Cole Anthony missed should have precluded his inclusion in the team, we are more inclined to believe that ten-game absence was what prevented by Anthony missing ten games was winning the NOTY award outright. While on the floor this term, Anthony often looked like one of the best players in the country, never mind the newcomer class, but was hampered by the worst surrounding cast at Chapel Hill in a generation. Whatever, we’re comfortable including Anthony in the team.

We’re also comfortable including Georgia’s Anthony Edwards, even if we did so a bit reluctantly. When Edwards inked with Georgia, it was regarded as a major coup for HC Tom Crean, but the Bulldog season instead evolved into more of a platform for Edwards to showcase his skills for the inevitable quick move to the NBA, which Edwards recently confirmed. But Crean’s acquiescence to Edwards did not help Georgia climb the SEC ladder, as the Dawgs finished in the same 13th spot in league play as they did a year ago. As the campaign progressed, Georgia’s lack of defense was alarming as the Edwards-centric focus failed to resonate. Edwards continued to shoot and ended the season a sub-par 40.2% from the floor, and continued to fire 3-balls indiscriminately even as his long-range radar deserted him in the last month of the season (Edwards hit 17 of his last 78 triples, an icy 21.7%, across his last ten games). Admittedly, Edwards was also often a highlight reel, and will very likely become a lottery pick in the upcoming NBA draft. No surprise if he becomes one of the NBA’s exciting new stars next season. But we think it’s interesting how perhaps the top two ballyhooed recruits in the country, Edwards and C James Wiseman of Memphis, didn’t help their teams win anything this term (Wiseman, ensnared in eligibility issues, played only a handful of games in November, and to no one’s surprise had already declared for the next NBA draft long before the season concluded). In the end, they both reminded how college hoops should become a better place when the inane one-and-done phenomenon is eliminated in the near future.

Mostly, however, we suppose that Edwards and Wiseman should serve as the latest cautionary tales in college hoops, and reminders to an everlasting reality on the recruiting trail...buyers beware!


Following is another TGS tradition, our additional “Newcomer” teams divided by region for the past season.